A Hatstall refers to a sorting which takes longer than five minutes. Professor McGonagall and Professor Flitwick were both hatstalls.

On Pottermore, a hatstall is what happens when the Sorting quiz doesn't have a conclusive answer after seven questions. The player can then choose between two, three or, very rarely, all four Houses.

A Hatstall between Ravenclaw and Gryffindor

A Hatstall between Ravenclaw, Gryffindor, Slytherin and Hufflepuff

A Hatstall between Gryffindor and Hufflepuff

A Hatstall between Hufflepuff and Slytherin

A Hatstall between Ravenclaw and Slytherin 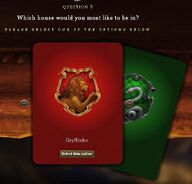 "A Hatstall is someone whom the Sorting Hat takes a very long time to place."

"An archaic Hogwarts term for any new student whose Sorting takes longer than five minutes. This is an exceptionally long time for the Sorting Hat to deliberate, and occurs rarely, perhaps once every fifty years.

"Of Harry Potter’s contemporaries, Hermione Granger and Neville Longbottom came closest to being Hatstalls. The Sorting Hat spent nearly four minutes trying to decide whether it should place Hermione in Ravenclaw or Gryffindor. In Neville's case, the Hat was determined to place him in Gryffindor: Neville, intimidated by that house’s reputation for bravery, requested a placing in Hufflepuff. Their silent wrangling resulted in triumph for the Hat."

Retrieved from "https://pottermore.fandom.com/wiki/Hatstall?oldid=43413"
Community content is available under CC-BY-SA unless otherwise noted.