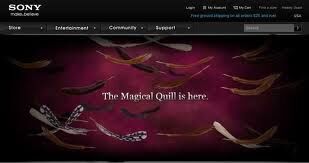 On July 31-August 6 there will be a Magical Quill challenge, for the lucky few that answer correctly they will have a chance at entering Pottermore early. Approximately 1 million will be chosen, once they are they will get their Hogwarts letter (email) as soon as possible and will be able to try it out 2 months earlier then the rest of the world.

Those of you who would like the chance to gain early access to Pottermore must find The Magical Quill, and then submit your registration details. Each day, from 31 July to 6 August, a clue will be revealed here. Solve the clue and you will be taken to The Magical Quill. Be quick, The Magical Quill won't be there for long and registration will only be open while spaces are still available each day.

What is The Magical Quill?

The Magical Quill is located in Hogwarts School of Witchcraft and Wizardry. It detects the birth of a magical child and writes his or her name down in a large book. Every year, Professor McGonagall checks the book and sends owls to the children who are turning eleven, to inform them that they have a place at Hogwarts. The lucky few who locate The Magical Quill during the Magical Quill challenge (which will run from 31 July to 6 August 2011) will have the chance to register for Pottermore early and gain access to the site before it opens to all in October 2011.

How will it work?

Clue: How many books are there in the Harry Potter series? Multiply this number by 10.

Next, add this number to the end of the website address. In this case it would be http://quill.pottermore.com/70

Then hit ‘Return’ to go to the website where The Magical Quill is located.

These are the questions J.K. Rowling announce for Potttermore so far.

What happens when I find The Magical Quill?

Once you have found The Magical Quill, you will be redirected to Pottermore.com. If the registration process is still open for that day, you will be able to submit your details to register to access Pottermore early. It is important to note that finding The Magical Quill does not guarantee you access to registration, as registration will only remain open while the early access places allocated for the relevant day, between 31 July and 6 August, are available.

Can I enter Pottermore as soon as I have registered?

No. After you have registered (by submitting your details and validating your registration via the email sent to you), we will send you a Welcome email letting you know that you can gain access Pottermore. Due to the number of people seeking to register, you may have to wait several weeks before receiving this email

The Magical Quill early entry period runs from 31 July 2011 to 30 September 2011. During this time, you will receive a Welcome email notifying you that your account has been enabled for access to Pottermore. If you did not register during The Magical Quill period, you will be able to register after the Magical Quill promotion has closed for entry in October 2011, when the site will be open to all. Keep checking Pottermore to find out when registration is open to all.

What happens when The Magical Quill promotion is over?

Retrieved from "https://pottermore.fandom.com/wiki/Magical_Quill_Challenge?oldid=41625"
Community content is available under CC-BY-SA unless otherwise noted.