The Wizard's Duel is a way to earn points while developing their spell skills.

The duel consists of a spellcasting minigame, where the player's performance is given a score and compared to the score of a random member of the house the player challenged.

The winner gains 5 house points. However, if the duel is a practice game against their own house, no house points will be given.

Click or press the first letter of the spell using your mouse or keyboard.

Then click or press the letter AGAIN when the circle around it is pulsing at its largest.

The more accurate you are, the more powerful the spell. Good luck!"

That there pretty much gives you the general idea on how to duel. First you click or press the letter: 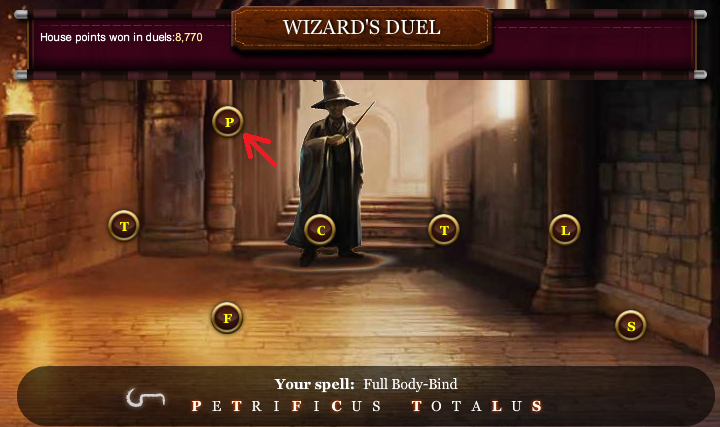 Then, once the circle around the letter is at its largest, click it again. Make sure to click it the first time it pulses and it gets as big as it can, as it doesn't get as big on the next pulse: 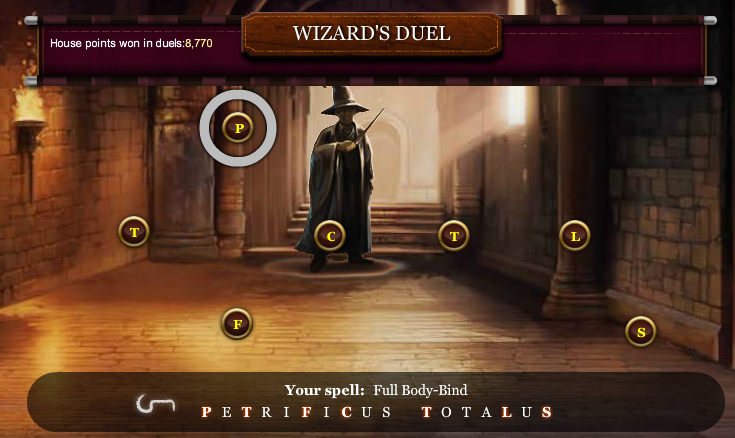 Then, wait for the white line to move to the next letter. Click it when the tip of the line is at the centre of the letter. You can't do this by vision, so you have to do it by timing, Then click it once the circle is at its biggest. Keep doing this until the spell is completed. 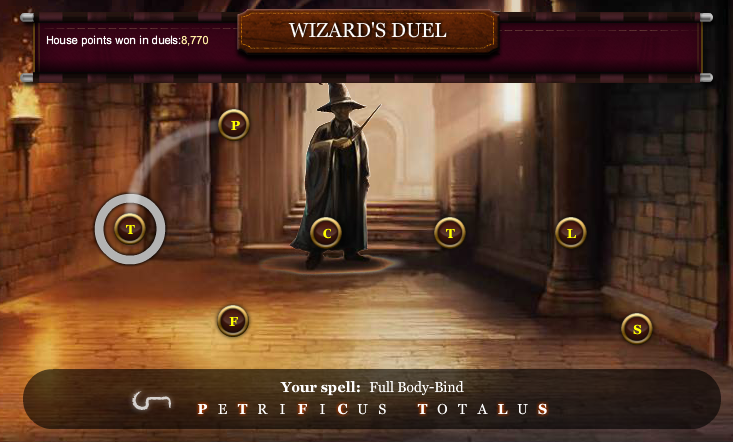 Not all spells are equal, as they all have different numbers as their max score. As of now, the best spell is the Jelly-Legs Curse found in the book Curses and Counter-Curses found in Book 1, Chapter 12, Moment 2. It has the highest potency of 163.

Players may start duelling after unlocking Spells in Harry Potter and the Philosopher's Stone, Chapter 9 "The Midnight Duel".

To begin with, players only start with three spells from the required textbooks The Dark Forces: A Guide to Self-Protection and The Standard Book of Spells (Grade 1):

After collecting Curses and Counter-Curses in Book 1, Chapter 12, Moment 2 a further seven spells are unlocked:

After buying The Standard Book of Spells (Grade 2):

In order of maximum spell potency:

Retrieved from "https://pottermore.fandom.com/wiki/Wizard%27s_Duel?oldid=35326"
Community content is available under CC-BY-SA unless otherwise noted.